Healing Hearts CAC helps children and families recovering from child abuse by providing a safe and child-friendly atmosphere for victims. The agency was recognized for creating meaningful results and for performing its work with a high standard of excellence.

“Healing Hearts CAC is very honored to receive the G. Bradley Wanzer Jr. Award For Excellence. Our United Way partnerships and collaborations allow us to serve the bravest children in Desoto County. We are humbled to be added to this impressive list of past honorees,” said Ashley Schachterle, Executive Director of Healing Hearts CAC. 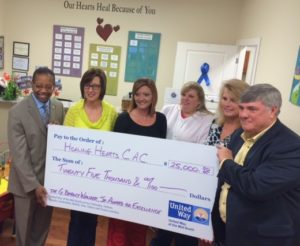 “Healing Hearts CAC is making a difference in DeSoto County, a very important part of our Mid-South region. The care they provide for children who have suffered abuse has a tremendously positive impact. They are a very worthy recipient of the Wanzer Award, and we could not be happier,” said Dave Skorupa, Director of Communications for United Way of the Mid-South.

The Award honors Brad Wanzer’s 31-year career at United Way of the Mid-South and his legacy of caring. After Wanzer’s unexpected passing in 2005, United Way created the Award to honor his memory and commitment to supporting a network of strong United Way partner agencies. It is the highest honor an agency in United Way’s partner network can receive, recognizing exceptional standards of service to our local community.

History of Agencies honored with the G. Bradley Wanzer Jr. Award For Excellence: