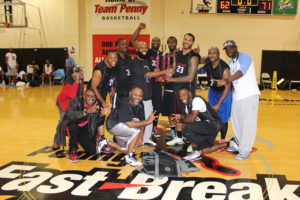 The winning team (Comcast) at the MLGW basketball tournament shows off their winning trophy.

The competition was reportedly fierce, with games going down to the wire, often decided by 2 or 3 points. These guys came to play!

MLGW’s United Way Steering Committee and volunteers staffed concessions and grilled hot dogs, smoked sausage and turkey legs with lots of other snacks and cold drinks. The Comcast team were well-deserved winners of the tournament, but host organization MLGW’s Transportation team put up a great effort to take second place.

(Note: Special thanks to Dan Hope from MLGW for his contribution to this story.)